The 2018 Fire Velo Cancer Awareness Ride honored 6 firefighters who had passed away from occupational cancer. 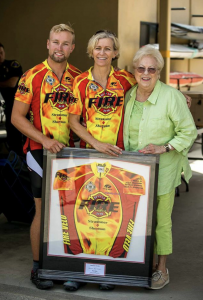 Bruce Mortimer lost his long time battle with cancer on Sunday April 8, 2018. Bruce was a longtime firefighter. He was married to wife Pam Larson Mortimer and had 3 daughters. After a long battle with cancer, Bruce A, Mortimer age 76 passed away on April 7th at home with his family.. Bruce was a 42-year resident of Wrightwood. He was born in Aurora, Illinois on April 25, 1941. Bruce married Pam Larson Mortimer on March 31, 1962 in Montebello, California. He had a 37-year career as a firefighter. He retired from Los Angeles County Fire Department in 2001. Throughout his career he sought varied experiences that the County had to offer in fire service. When he first joined the County, he was assigned to Air Attack and helped establish the Air Ambulance program. He was also a part of the first paramedic classes. He worked as a paramedic in the busy South Central Los Angeles area and other fire stations across the county. He took his expertise onto the set of the TV show “Emergency” as a technical advisor. With a promotion, he later returned to the Air and Wildland Division as a Camp Foreman where he led crews in wildland fire fighting throughout California. Bruce was a woodworker reproducing various beautiful antique apparatus. His most notable projects were antique fire alarm bells and a miniature tiller truck that his daughters drove in parades. These interests extended into his participation in restoration and donation of antique fire equipment to museums. He also enjoyed building stage sets for the Snowline Players. Other contributions in the community include making the first fake raft for the Wrightwood Country Club, highway clean up, the town rattlesnake re-locator, and supporting his daughters in all their extra-curricular activities at Serrano High School. Most important, he loved his family, his friends, his dogs, his truck, trains, and Neil Diamond. Family, neighbors and friends could always count on Bruce. He was not uncommon for him to stop and help at an accident, rescue an animal, or shovel out an early brush fire. He will be greatly missed. He is survived by his wife of 56 years, his daughters Colleen Mortimer-Scott & husband Gordon Scott and Wendi Mortimer Swanson; grandchildren Holly Dillenbeck, Gregory Blanks, Madeleine Blanks, and Shane M. Swanson; great grandchild